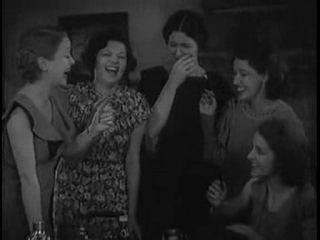 Also known as THE WEED WITH ROOTS IN HELL, this is an above-average exploitation flick by Dwain Esper. The cautionary tale begins when a group of teens, seeking new thrills, succumb to the temptation of the "giggle weed" at a beach party one night. Before they know it, they're incapacitated by maniacal laughter and give themselves over to wild debauchery. It's all fun and games until one of their party drowns while skinny-dipping, and another girl, Burma, finds herself pregnant. After the father is killed while smuggling drugs, Burma gives up her baby on the advice of the dealers, and is roped in to selling drugs herself. She begins to enjoy the high life of a drug dealer with her reputation as "Blondie, Ice Queen of the Snow Peddlers", but her newfound success is threatened when she decides to kidnap her own child back, and must learn that crime does not pay.

Esper takes this sensationalist material and turns it into as stylistic tour-de-force that sometimes borders on the unintentionally surreal. The pacing is at times languid, almost dreamlike, and creates an odd and disorienting effect when intercut with undercranked silent footage, such as in the nocturnal skinny-dipping sequence. There are some good camera moves as well, and at one point Esper finds creative ways of obscuring frontal nudity with clever camera angles. He also employs an effective use of classical music on the soundtrack, particularly in the sequence where Burma is forced to walk home after rejecting her boyfriend's sexual advances, with the tone of the music creating an interesting contrast with the tone of the scene.

But most of all, Esper is clearly having a ball exploiting the subject matter, and makes sure his audiences -- who spent their hard-earned money to see it -- have fun too. With its scenes of wild parties, playful nudity and illicit drug-taking, this one's a hoot.
Posted by Anonymous at 11:11 PM