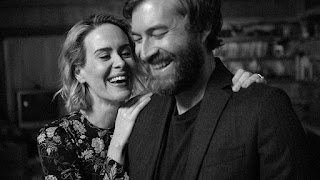 One of the great things about Netflix is the trove of independent films available on the service. They're just buried pretty deep in the algorithm sometimes, so you just have to do a little digging to find them.

One film that I came across recently was a poignant romantic drama called Blue Jay, from 2016, directed by Alex Lehmann, and starring Mark Duplass and Sarah Paulson. Duplass has become one of my favorite actors to watch recently, both in his own independent productions as well as in Hollywood films and series (I'd just seen him in "Manhunt: Unabomber", playing Ted Kaczynski's brother who turns him in to the FBI).

In Blue Jay, he plays a middle-aged man who returns to his hometown to sell his recently-deceased mother's home and spends his time there sifting through the pieces of his life. While there, he runs into an old friend from high school (Paulson), and the two end up spending the day, and eventually the evening, together, reminiscing about old times in Duplass' childhood home. As the day wears on, and old memories come to the surface, it's revealed that there is much more to their relationship than initially was apparent.

Beautifully shot in B&W. This was the first of the Duplass brothers' productions made under their deal with Netflix.