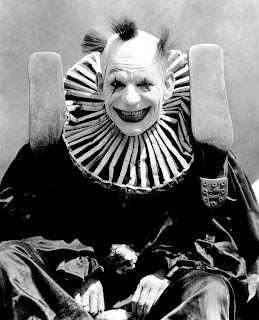 "A clown may be amusing in a circus ring, but what would be your reaction to opening you door and finding that same clown on your front step at midnight?" -- Lon Chaney

Directed by Swedish master Victor Sjostrom (billed as "Seastrom" during his Hollywood tenure), this silent thriller stars Lon Chaney as a scientist whose groundbreaking research is stolen by his wealthy patron, and his life spirals out of control as he is reduced to performing as a circus clown whose act consists of being repeatedly slapped in the face.

Chaney delivers a typically fine performance as the tragic clown. Newcomers John Gilbert and Norma Shearer appear in early supporting roles, and former Keystone Cop Ford Sterling plays one of the clowns. Chaney would again appear in a story of a Pagliacci-style clown in 1928's Laugh Clown Laugh. The character provides a rich contrast between his inner torment and outward appearance

This was the first film produced under the newly-formed MGM studio, in 1924.