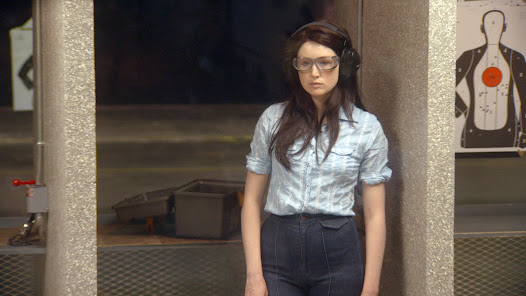 A while ago, I had watched Antonio Campos' excellent film Christine, starring Rebecca Hall as Sarasota television journalist Christine Chubbuck, who tragically committed suicide on live TV in 1974. Recently, I learned of this other film about Chubbuck that was released the same year, and takes a very different approach. In this one, actor Kate Lyn Sheil is seen preparing for portraying Christine Chubbuck in a fictional film about her life, and in the process of discovering the role she is set to play, the line between fact and fiction is blurred. Director Robert Greene's docu-drama approach provides an interesting take on the difficult and complex process that the actor goes through in becoming closer with the person he or she is hired to portray, especially in the case of someone remembered primarily because of the sensational nature of her death. Along these lines, Kate Plays Christine also raises questions about the culpability of the audience in wanting to see such events portrayed on screen.