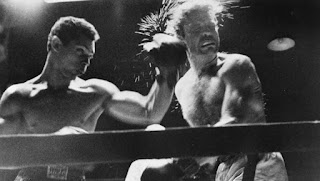 Kubrick's second feature film (though often cited as his first "real" feature, as the director suppressed his earlier film, Fear and Desire) is a low-budget, independent production shot in the streets and apartments of New York. Filming on his home terf, Kubrick brings his photographer's eye to composing stark B&W imagery that could have come right out of the pages of his work for LIFE magazine.

It's the story of a slightly past-his-prime boxer who falls in love with a showgirl, but her boss has his own romantic interests in the girl, and tries to stop both of them before they can leave town. The script is by future Hollywood screenwriter Howard Sackler, but it's a slight thread of a story that is padded out with extensive flashbacks and narration that really don't add much that we don't already know.

What the film lacks in plot, however, it more than makes up for in style, and it's easy to see why this film lead to Kubrick's association with producer James B. Harris and a bigger budget for his next film, The Killing, the following year.