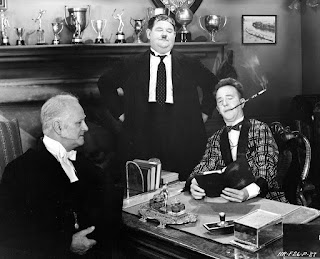 Watched this one again this morning. Stan Laurel's "Lord Paddington" character is often cited as perhaps the best performance he gave in any of the team's films, but watching it this time, I was struck by just how great he is in every scene. Although Laurel and Hardy played effectively the exact same characters in all their comedies together, in some of the films, one or the other tends to dominate. Swiss Miss, for example, seems dominated by Oliver Hardy's character. This one, on the other hand, strikes me as more of a showcase for Stan, and he does some of his all-time best work here, both as his usual dimwitted character and as the genius professor who is an academic and athletic champion and consults with Einstein.

That's not to downplay Hardy's contributions -- he's great as ever, particularly when he's reduced to working as Laurel/Paddington's incredulous servant and getting bossed around by his old friend, a fun inversion of their usual on-screen relationship (reminiscent of the ending of One Good Turn).