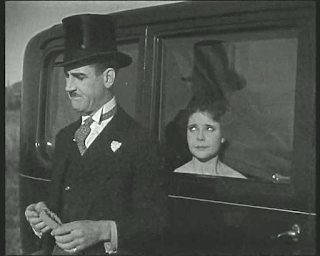 Very funny two-reel farce, with Charley Chase -- en route to his wedding -- finding himself stuck in a car with a woman who's lost her clothes, and her jealous husband who would kill them both if he found his wife with another man. The second half of the film, with Chase trying desperately to hide the woman with the help of both her unsuspecting husband and the entire wedding party, is a masterpiece of construction.

Chase milks the comic possibilities of this situation for all their worth, and creates a classic comedy of embarrassment that ranks among the very best of the films he made for Hal Roach. He's expertly directed here by Fred L. Guiol, and supported by a fine ensemble cast including master of the slow-burn Edgar Kennedy as the jealous husband, Viola Richard as the embarrassed wife, and Edna Marion as the suspicious bride-to-be.
Posted by Matt Barry at 5:20 PM