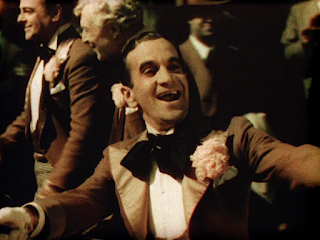 Excellent Al Jolson vehicle and pre-Code musical drama, from the Irving Berlin play, about romance and intrigue behind the scenes of a traveling minstrel show. Al, the troupe's endman and star attraction, is in love with manager's daughter, but finds himself accused of the attempted murder of the company interlocutor after real bullets are substituted in his prop gun during the act one night.

Berlin's hit songs include "Across the Breakfast Table, Looking at You", "Night Boat to Albany", "Who Paid the Rent for Mrs. Rip Van Winkle?", and "Let Me Sing and I'm Happy", all performed with great gusto by Jolson. Louise Dresser turns in a touching performance as Al's mother. Directed with snappy pacing by Michael Curtiz, and featuring sequences shot in 2-color Technicolor.
Posted by Matt Barry at 9:21 PM