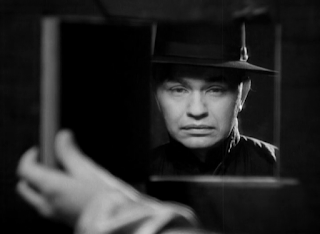 Bizarre, lurid pre-Code melodrama, directed by William Wellman and starring Edward G. Robinson as Wong Low Get, the "hatchet man" (a highly-respected assassin) for the warring Tong factions in San Francisco's Chinatown. When he is dispatched to kill his closest friend, Wong Low takes charge of the man's daughter. Years pass and Wong Low marries the now-grown daughter (Loretta Young), but she is in love with another man, and this discovery causes Wong Low's life to fall apart around him. When he learns that the other man has dishonored his wife and sold her in to sexual slavery, Wong Low sets out to seek revenge.

The absurdity of seeing stars like Robinson and Loretta Young playing Chinese characters in yellowface is worsened by the insensitive, simplistic characterizations and awkward, uncomfortable cultural stereotyping (with characters frequently either speaking in proverbs or engaging in barbaric fighting), and is representative of the inherent racism in the "Yellow Peril" trope so prevalent in Hollywood films -- and American culture in general -- during this time.

One of the lesser films that Wellman made during this prolific and interesting period of his career for Warner Bros., his normally subtle and economic directorial style too often lapses into heavy-handed symbolism and other effects that call unnecessary attention to themselves (such as filming Robinson's murder of his friend in silhouette). Despite the obviously problematic nature of his role, Robinson's performance is otherwise characteristically sensitive and restrained, while the rest of the cast-- which includes Leslie Fenton, Dudley Digges, Edmund Breese, Tully Marshall and J. Carrol Naish -- fares far less well in their parts.
Posted by Matt Barry at 9:49 PM