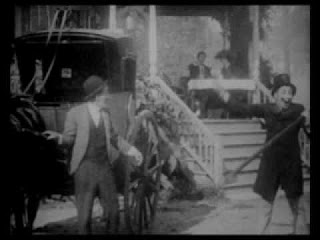 Early American slapstick comedy, directed by D.W. Griffith and starring future comedy producer Mack Sennett as a French dandy who goes in search of a new curtain pole to replace the one he has broken. Transporting the pole back through the streets, he proceeds to wreck everything in his path, causing the irate townspeople to give chase.

It is an atypical effort for Griffith, and a rather impersonal one, being just one of the many short subjects he directed for Biograph during this time (and shot on the streets of Fort Lee, NJ). While it demonstrates his penchant for rousing chase sequences, the staging and editing feel loose and rather clumsy compared to his best dramatic efforts of the period, though are certainly moments of effective slapstick (mostly involving Sennett in a runaway carriage). Clearly inspired by the French chase comedies of the Pathe company, it is mainly of interest now as a forerunner of the kind of screen comedy that its star would perfect at Keystone a few years later.
Posted by Matt Barry at 3:58 PM