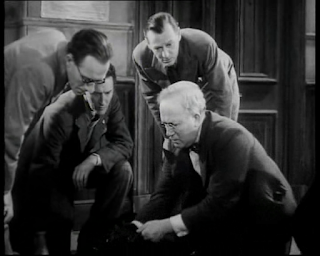 A fun, entertaining little British comedy-mystery, based on the oft-filmed play by Arnold Ridley and updated to a contemporary (World War II) time frame, about a group of passengers who get stranded on a dark and stormy night at a remote train station in the middle of the countryside that is reputedly haunted by a phantom train.

There are plenty of chills and suspenseful moments, though there is also a great deal of silly humor in the form of British music hall comedian Arthur Askey. His good-natured silliness is rather endearing, even if his character is called on by the script to annoy the other characters to no end (and perhaps works a little too well in this regard at times). Much of the fun comes simply from watching the interaction of the colorful cast of characters, especially Kathleen Harrison as the spinsterly Miss Bourne and Herbert Lomas as the ominous stationmaster. Walter Forde's direction does a fine job in balancing the mystery and the comedy, while Jack Cox's shadowy cinematography adds considerably to the suspenseful atmosphere. Recommended viewing for fans of the genre.
Posted by Matt Barry at 9:38 PM