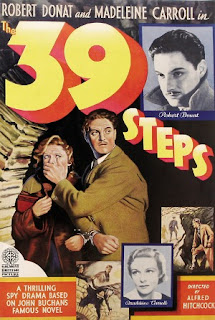 Taking in a screening of Hitchcock's THE 39 STEPS recently, I realized that this has become probably my most oft-watched Hitchcock film. Certainly it's the one I can return most frequently without losing any of the suspense or freshness of Hitchcock's technique. As I wrote in a recent post on NORTH BY NORTHWEST, sometimes the iconic sequences of Hitchcock's best-known films can come to play better in my mind, where they exist in a kind of rosy retrospection.

That is not the case with THE 39 STEPS, however. It is a film I have seen probably at least a half-dozen times if not more, and each time I am swept up anew in the breathless pace of the endlessly engaging story, the erotic chemistry of Robert Donat and Madeleine Carroll's performances, and of course, Hitchcock's masterful technique that shows his fertile creative mind at its most active and visionary. After the screening, I commented that the film is one of the very few that I would describe as "perfect" -- not a wasted frame or extraneous moment in the entire piece.

I find, more and more, that I am drawn to the early works of directors, often those formative films made before they hit their full stride and became identified with a certain style or genre. I'm not sure if I would consider THE 39 STEPS to be an "early" Hitchcock film, given that it was already something like his 20th film as a director, and made fifteen years after he'd entered the film industry. But it nonetheless contains the kind of energy and vitality and creative experimentation that I associate with the earlier films of directors, and in terms of Hitchcock's filmography, it certainly set the standard for many of his most successful films to follow, not to mention establishing a prototype for the entire espionage film genre.
Posted by Matt Barry at 3:52 PM