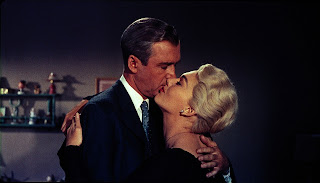 I noticed something interesting at last night's SUSPIRIA screening -- though it was hard to miss, as it was actually quite distracting: sometime around the second half of the film, roughly half the audience began laughing raucously at the film, which totally took me right out of the carefully-crafted, haunting atmosphere of the experience.

It reminded me of my experiences watching VERTIGO, another haunting, dream-like film that often inspires fits of uncomfortable laughter from audiences. At least in that case I can understand the laughter as a nervous response to the increasingly unhinged behavior of the Jimmy Stewart character.

I'll never forget the first time I saw VERTIGO with an audience in film school years ago. There was one moment in particular that got such a strong laugh from everyone in the room but me, and I've never understood it. It occurs when Scottie Ferguson gives the distraught Judy Barton a brandy and tells her to drink it down. That moment got a huge laugh from everyone. The professor, also laughing, said, "Hey, it was the '50s..."

I still didn't get it.

There was another incident I recall, more recently, during a screening of ALL QUIET ON THE WESTERN FRONT at Loew's Jersey City. At the moment of the reveal that Kropp's leg has been amputated, someone in the audience let out a loud burst of uncomfortable laughter, possibly out of surprise. The poor devil was the only person in the entire house to react that way, so it must have been embarrassing.

At least it was an honest reaction.
Posted by Matt Barry at 11:12 AM