Monterey Pop and the Avant Garde 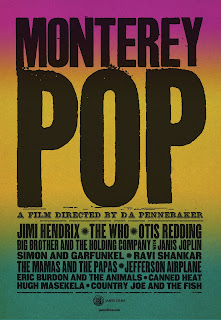 I watched D.A. Pennebaker's film of MONTEREY POP a few weeks ago at the Senator Theatre in Baltimore for the first time, and hadn't jotted down any thoughts on it yet, perhaps because it is such an "experience" beyond being just a filmed record of the concert.

However, something that I have found myself thinking about quite a bit since then is the way that the film, and indeed, much of the Direct Cinema movement, fuses the concepts and energies of both the documentary and avant garde traditions. There are sequences in MONTEREY POP show the direct influence (and directly influenced?) the techniques of Jonas Mekas' diary film shooting style, for example.

Similarly, if you look at an earlier film by Pennebaker, DAYBREAK EXPRESS (1953), it's difficult to even classify -- is it a documentary of a morning train commute, or an avant garde city symphony (or jazz riff, in this case), animated in light and shadow? Why can't it be both?