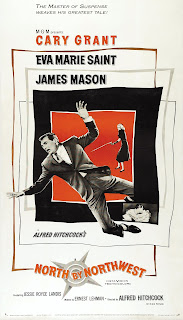 I caught a screening of this Hitchcock classic as part of the Filmtalk screening and discussion series at the Enoch Pratt Library this afternoon. I hadn't seen it in several years, at least. Despite its status as perhaps the "ultimate" Hitchcock film, I have to confess it is not one that I re-watch as frequently as some of his other movies, even though it is undoubtedly an immensely enjoyable film. This isn't so much due to overexposure, as I have not actually seen it that many times compared to, say, PSYCHO, or THE 39 STEPS, or even ROPE. For some reason, it's a film that has tended to play better in my mind, perhaps due to the standout sequences (the crop-duster, Mount Rushmore) that rank among some of the most iconic in all of cinema.

So it came as a pleasant surprise, upon seeing it again for probably the first time in at least a decade, that I enjoyed this highly entertaining film even more than expected. More than ever lately, I have found how much more I enjoy seeing films with an audience, even if just a few people, where you can share in the experience of the film together.

As I mentioned above, NORTH BY NORTHWEST is a film that holds few surprises for me at this point, even if I do hold a good deal of affection for it. This time around I was struck more than ever by the playfulness of Hitchcock's approach, and even moments of wry humor, such as the strains of "It's a Most Unusual Day" wafting through the hotel lobby moments before Cary Grant is kidnapped. And I was struck by Hitchcock's unconventional (especially for the period) use of space and time in building up to the crop-dusting sequence. The lengthy stretches of silence and the vast expanse of the landscape in the moments leading up to the attack by the plane look forward to his use of similar elements, to an even greater degree, in THE BIRDS a few years later.

And was there ever a director with more of a gift for making actors look good than Hitchcock? NORTH BY NORTHWEST offers strong evidence that the answer is "no".