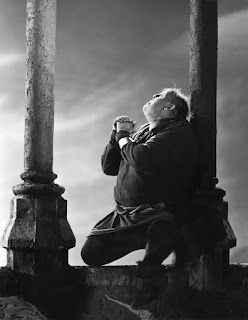 There was an anecdote I read years ago -- and I've forgotten where I read it now -- about a joke circulating in Hollywood during World War II, something to the effect of "In the case of an air raid, go over to RKO Radio Pictures -- they haven't had a hit in years."

That always puzzled me, because it seems to me that RKO produced many of the finest individual films of the studio era. Of course, it's possible that this did not translate to big box office hits that some of the other studios may have enjoyed, but the quality of the studio's output speaks for itself with such fine films as Citizen Kane, King Kong, Gunga Din, Bringing Up Baby, Little Women, and the Astaire-Rogers cycle, among many others.

Chief among the examples of RKO's great films must be the 1939 production of The Hunchback of Notre Dame, starring Charles Laughton in the title role. His achingly beautiful performance stands as one of his finest accomplishments in a long career filled with memorable roles. It has been noted that the Hunchback has relatively little screen time for what is the starring role, and yet Laughton's presence looms large over the film. Even when he is off-screen, we never forget about him. Laughton is one of many fine actors in a cast that includes Maureen O'Hara (in her first Hollywood film), Sir Cedric Hardwicke, Thomas Mitchell, and a youthful Edmond O'Brien, among others.

What really stands about the film is its exceptional production values. I have read that, at the time, Hunchback was the second-most expensive production RKO had yet undertaken (the most expensive being Gunga Din, released the same year), and it shows. Medieval Paris is brought to life in great scale on the RKO backlot, aided by impressive matte paintings. William Dieterle, one of the more interesting studio craftsmen working in Hollywood's studio system, and frequent John Ford cinematographer Joseph H. August create a vivid atmosphere that brims with bustling activity in the daylight, and a sense of quiet menace in the shadow of night.

Perhaps because it was released in that remarkable year of 1939, The Hunchback of Notre Dame has been overshadowed somewhat by the other great films of that year, and does not seem to be revived as often as some of those other films (not just the perennial favorites Gone with the Wind and The Wizard of Oz, but also the genre-defining Stagecoach and the Capra classic Mr. Smith Goes to Washington). But it stands as the equal of any of the other great films of 1939, and remains one of the finest achievements of the Hollywood studio system.
Posted by Matt Barry at 2:14 PM