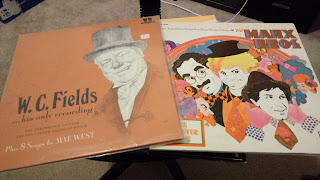 Going through my collection of movie soundtrack albums tonight, I came across these two old favorites. One is a collection of recordings of routines by W.C. Fields (subtitled "...His only recording"), also featuring eight songs by Mae West, and the other is a collection of scenes from the films of the Marx Bros., featuring "the original voice tracks from their greatest movies". These albums were extremely popular during the height of the nostalgia craze in the early '70s, and were also quite useful in the pre-home video days, when such albums were the only way to re-visit favorite scenes from these films.

There was also a series of books, many by Richard J. Anobile, that served a similar purpose and included frame blow-ups and dialogue transcriptions from famous films. I have one called Why a Duck?, which consists of scenes from the Marx Bros.' comedies. Anobile wrote others, too, including Who's on First, A Flask of Fields, A Fine Mess, plus individuals volumes on classics such as PSYCHO, THE MALTESE FALCON and FRANKENSTEIN, among others. He even wrote one on THE GENERAL, though it's hard to imagine how his scene-by-scene frame blowups would work for a silent film.

I wonder how many people still collect these? Home video eventually rendered these kinds of books and albums obsolete, but as classic film comedy fans know, it's hard to ever pass up a chance to spend time with your favorite comedians, no matter what the format.
Posted by Matt Barry at 6:44 PM