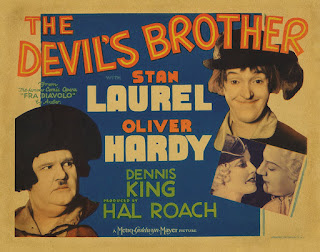 The first of Laurel and Hardy's operetta films, and quite possibly the best, adapted from the 1830 show by Daniel Auber. The boys play down-on-their-luck vagabonds in 18th century Italy who reluctantly become the bumbling assistants to the notorious bandit chief Fra Diavolo ("The Devil's Brother"). Comedy highlights include Laurel's "kneesy-earsy-nosey" finger games and Laurel becoming intoxicated while filling bottles in a wine cellar. The soundtrack retains a number of the songs from Auber's original score. Singer Dennis King brings the perfect mix of menace and charm to the title role, supported by a fine cast including Thelma Todd as the bored noblewoman, James Finlayson as her cuckold husband, and Henry Armetta as the long-suffering innkeeper whose inability to imitate Laurel's "finger games" causes him no end of frustration. One of the only Laurel and Hardy films directed by their long-time producer Hal Roach.
Posted by Matt Barry at 10:19 PM