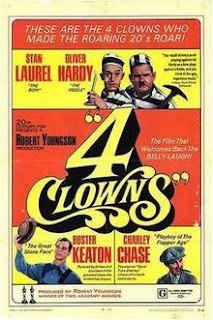 The last of Robert Youngson's silent comedy compilations. The four clowns of the title are Stan Laurel and Oliver Hardy, Charley Chase, and Buster Keaton. The first section begins with some solo appearances by Laurel and Hardy before they were a team (including Hardy's menacing turn as a villain in a Rex the Wonder Horse Western made for Hal Roach), then switches to clips from some of the team's best silent comedies (some of which, such as Two Tars and Big Business, were seen to better advantage in earlier Youngson compilations).

Next up is Charley Chase, with clips from several of his late '20s Hal Roach comedies. Chase is an affable character, perpetually embarrassed and facing a series of one humiliating incidents after another. As with some of the other Hal Roach comedies, including the short films of Harold Lloyd, I occasionally find Chase's gags a little too mechanical and contrived -- such as the bit here where he is posing for a family portrait and his youngest son's balloon keeps bursting, so Chase repeatedly needs to run out and get another one to calm his son down before they can take the photo. Predictably, Chase ends up with a bunch of balloons that lift him off the ground as he runs down the street. I'm not as big a fan of this kind of situational humor. Chase is better represented here by one of his very funniest shorts, Limousine Love (1928), a brilliant farce in which he's a bridegroom, en route to his wedding, who ends up arriving at the ceremony with an undressed woman in the back of his car.

Finally, there is a condensed version of Buster Keaton's Seven Chances. Reportedly, this was Keaton's least favorite of his own feature films, because his producer had bought the rights to the stage farce and more or less foisted the material upon Keaton (who never cared for farce comedy, finding it forced and unfunny). What Keaton did with that material, though, was to re-shape it and make it his own, and I've always considered it one of his funniest movies. The celebrated chase sequence, in which Buster is pursued through the streets by 700 angry would-be brides, concludes this compilation, and it's an extremely strong note on which to end the final film by Robert Youngson, who did so, so much to keep the legacy of silent comedy alive.