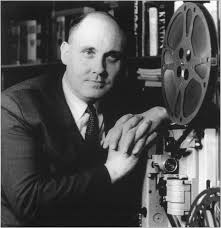 The Pacific Film Archive in Berkeley, Cal. has uploaded a series of recordings of film historian William K. Everson's introductions to his film screenings at PFA in the 1970s and 80s. The selection is available to stream at the Internet Archive here.

Everson was a big champion of the unsung gems of film history, including silent film at a time when few took it really seriously. These recordings are a good opportunity to hear more of his insights into some rarely-discussed films.