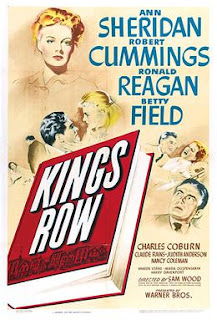 This is one of those films that used to play on TCM constantly back when I had cable, but I never watched it, so I took the opportunity to see it on the Criterion Channel before it leaves tomorrow.

Bob Cummings and Ronald Reagan are childhood friends in smalltown, turn-of-the-century America who each go their separate ways but remain close through life's ups and downs. And man, are there a lot of downs -- by end of the film, the number of painful incidents that pile on top of each other strain credibility even for a bleak melodrama such as this. Apparently the source novel was so downbeat that both the producers and the Hays Office initially considered it unfilmable.