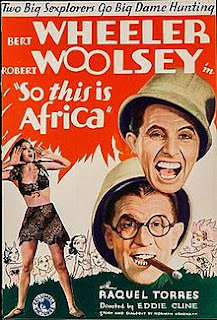 This one lived up to its reputation as one of the wildest of pre-Code comedies. It was the only film Wheeler and Woolsey made away from their home studio of RKO, and so it's been harder to find a copy of this one, even though I've been looking for it for about 15 years now. Thankfully, YouTube came through for me.

I won't bother recounting the plot -- which involves Wheeler and Woolsey somehow being selected to accompany a documentary filmmaker to Africa -- but I will say that the Norman Krasna script, Kalmar & Ruby songs, and direction by Eddie Cline keep the pace and laughs cracking for 60 minutes straight (apparently the film originally ran almost half an hour longer, but censors demanded trims before it could be released -- keep in mind, this was even before the enforcement of the Production Code a year later).

I really became a big Wheeler and Woolsey fan about 15 years ago, after reading Ed Watz's excellent bio of the team, and seeing a number of their films on TCM, including the wild and crazy Diplomaniacs (1933), which has been compared to Duck Soup for sheer zaniness.

A few of the team's early films, including Dixiana, Half Shot at Sunrise, and Hook Line and Sinker, are in the public domain and can be freely viewed online.