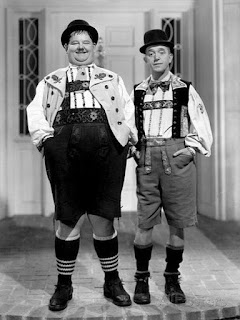 The Movies! TV network's Saturday morning Laurel & Hardy show is one of the best things going on television. I always look forward to tuning it each weekend to see my favorite comedians.

This morning, they ran Swiss Miss, one of the team's later features for producer Hal Roach. In this one, the Boys are mousetrap salesmen in Switzerland who become indentured servants in a big Alpine hotel after they can't pay their bill.

It's a bigger production than usual for them, filled with sumptuous production design and some great supporting players -- including Walter Woolf King (from the Marx Bros.' A Night at the Opera), Della Lind, Eric Blore, and Hollywood's top gorilla impersonator, Charles Gemora (who shares the best scene in the film, a variation on the piano moving mishaps reminiscent of The Music Box).

I know many Laurel and Hardy fans seem to hold a generally low opinion of Swiss Miss -- and I really can't understand why. Yes, there's more singing and dancing than usual, but for me, those elements just add to the fun of it all. And there are so many great comedy bits -- drilling holes in the cheese shop floor, the pipe organ blowing out animated bubbles, Stan's desperate attempts to coax a St. Bernard into letting him access its brandy barrel, and of course moving the piano across a rickety suspension bridge. The only thing missing are some of the familiar Hal Roach stock company faces (James Finlayson, in particular, would have been great as the sadistic hotel chef).

I read once that Oliver Hardy ranked this among his very favorite of the films he made, because he liked starring in a more elaborate film with big production values.