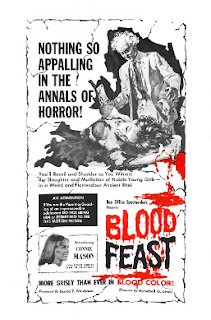 I've been watching some of the Herschell Gordon Lewis films currently streaming on the Criterion Channel. I thought I'd seen Blood Feast on TV years ago, late at night on TCM, but now I'm not sure. I watched that one first, then Two Thousand Maniacs. I remember years ago, reading John Waters' book Shock Value, he devoted a chapter to his interview with Herschell Gordon Lewis, one of his cinematic heroes. I can see why Lewis' films would have appealed to him.

Although I was certainly familiar with Lewis' contributions to the gore genre, this has been the first time I've really gone through his filmography. Blood Feast is the one that started it all. John Waters used excerpts from it in his Serial Mom. A local caterer kidnaps and kills women for sacrifice to the goddess Ishtar. Though its influence is immeasurable, this premise isn't really enough to support the long stretches between the splatter scenes, but at least the whole thing runs just over an hour.

I preferred the zanier Two Thousand Maniacs. A town in the deep South is celebrating the centennial of a battle that laid waste to the entire town at the end of the Civil War, and hold hostage some Northern tourists who have been diverted off the main highway, proceeding to kill them off as revenge for the defeat suffered one hundred years earlier. It's social commentary, of a sort. Again, Waters paid tribute to this one with the title of his own film, Multiple Maniacs.

These are the kind of movies that have their own style, their own pace, and a distinctly unique sensibility, and you have to go with their flow to really get into them.