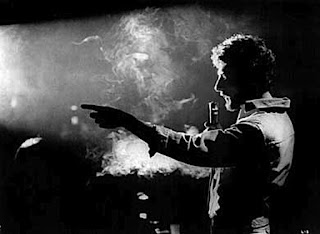 I'm not normally a fan of these types of biopics, but the combination of the subject, Dustin Hoffman's performance, and the fact that it's directed by Bob Fosse intrigued me. I'd actually been meaning to see this one since watching Fosse's All that Jazz about 15 years ago, which contains a film-within-a-film modeled on Lenny. For whatever reason, Lenny eluded me over the years -- either I wasn't able to find a copy when I was looking for one, or I didn't think to look for it when it might have been available.

Either way, I recently learned that it was available over on the Criterion Channel, and finally watched it last night. It reminded me a bit of Raging Bull in tracking its self-destructive character's rise and fall, not to mention the evocative B&W cinematography (by Bruce Surtees).

Fosse's direction is always fascinating, and he skillfully blends the pseudo-documentary approach with Hoffman's intense re-creations of Bruce's stand-up act. Hoffman delivered so many fine performances during the 1970s that it can be easy to overlook some of them. I rarely see this one mentioned when listing his great roles during that decade, but to me it ranks up there with the best of them.