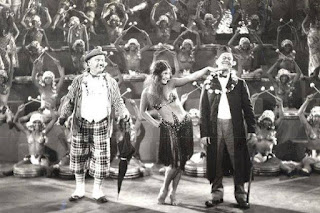 Years ago, I read about the comedy team of Clark & McCullough in Leonard Maltin's book on comedy short subjects. I'd never had a chance to see any of their films, though, which proved to be quite elusive. Until recently, that is -- when a number of them started turning up on YouTube. I watched one of the earliest ones on there last night, Belle of Samoa, made for Fox in 1929. This is apparently one of just two of the team's early Fox sound comedies that exist today (the other being Waltzing Around, also from 1929). Belle of Samoa was originally conceived as a sketch in the feature-length revue, Fox Movietone Follies of 1929, but was evidently such a hit with studio execs that they decided to release it as its own short subject.

The short's origins as part of a musical revue are evident in the amount of music-and-dance numbers in its short running time, though it's a good record of what the comedy team's Broadway and vaudeville performances must have looked like. As with other early sound comedies like The Cocoanuts or Rio Rita, it's a valuable record of a bygone era of entertainment, preserving for posterity what theater audiences would have seen.

After their stint with Fox, the team made a series of shorts for RKO Radio Pictures, which I plan to check out soon.